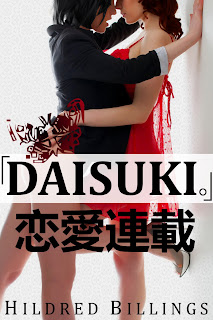 Aiko and Reina have been together for almost 20 years, yet one thing remains unsaid between them: “Daisuki,” or, “I love you.” As they approach their anniversary, their relationship comes to an impasse as Aiko the Japanese housewife begins demanding “I love you” with a side of marriage and romance.

But Reina doesn’t understand complex concepts like “love” or other heavy emotions. She’s spent years supporting her girlfriend via a soul-sucking salary job and tending to their mutual needs in the bedroom. Isn’t that sufficient? In a culture demanding Reina choose between the “feminine” and the “masculine” worlds, it’s bad enough she’s trying to find her role without Aiko adding extra pressure.

Some words need not saying, but “I love you” is about to destroy a relationship already surviving strange side-lovers and even stranger exploits.

This series contains heavy themes of polyamory and gender dysphoria.

Some lovely comments from Amazon reviews:

“The characters were intriguing and well fleshed out. The relationship between the two protagonists was realistic, they both made sacrifices for the other in order to maintain their 20 year partnership. I understood why they loved each other and the conflict within the narrative was simple yet compelling… I would recommend this book to anyone who likes realistic and/or angsty romance.”  – Dani

Now available for only 99 cents on ALL retailers in ALL regions!