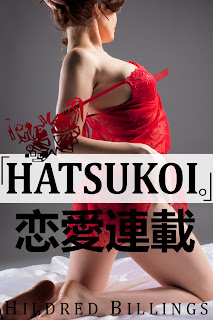 With only two days left until the official release date of “HATSUKOI.”, book 2 of the REN’AI RENSAI series, it’s time to release the official preview! First, the blurb!

If society has taught Aiko anything, it’s that one day she will marry a man. Not until she meets Reina, a lesbian with a knack for flirting, does she decide she wants to experience a different kind of sexual liberation – assuming she can overcome her insecurities and nosy family. As she succumbs more and more to Reina’s charms, however, Aiko wonders if she can really abandon everyone’s expectations.
Reina has met plenty of girls like Aiko before: cute, naive, and ready to screw the status quo. After being burned by countless young women who go on to marry men and forget their lesbian lives, how can Reina trust yet another “good girl” following her around? Especially when she thinks she may be having those foreign feelings for her best friend instead.
Time will only tell if Hatsukoi, or “first love,” has really come to two such different people. Is their relationship genuine or just another footnote amongst flirting, lying, and sneaking around love hotels?
“HATSUKOI.” is the second published novel, but the first one chronologically, so it can be read either before or after “DAISUKI.” Below is the first scene (about 1700 words) to whet your need for more! ONLY TWO DAYS LEFT! Maybe less? I’ll be uploading it tomorrow!

WARNING: Strong language and sexual topics. A certain character (gee, I wonder who) likes to refer to sexual relations in the crudest language possible.