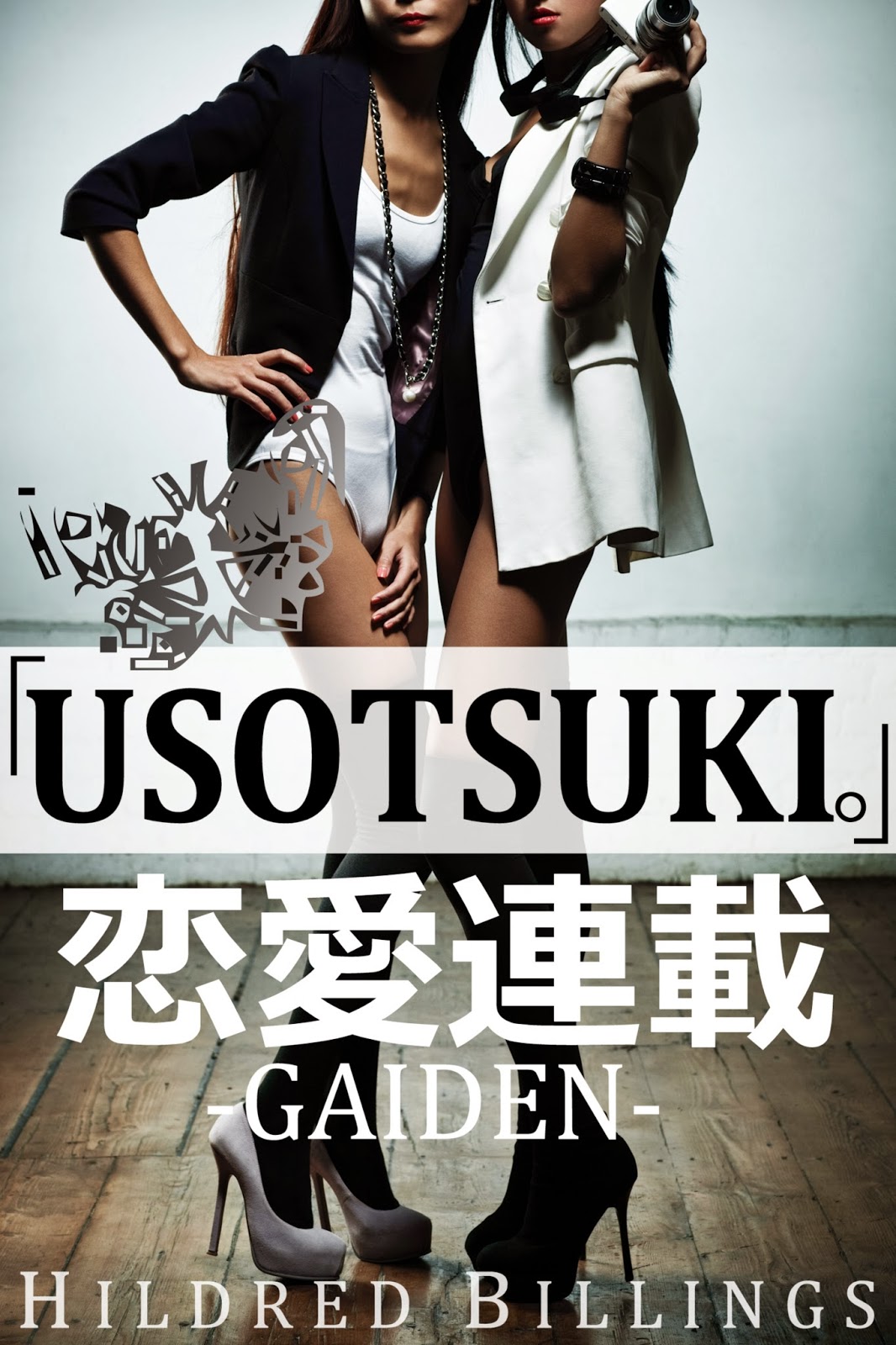 The REN’AI RENSAI: GAIDEN (Another Story) series is a companion piece to the main Ren’Ai Rensai series focusing on alternate views to stories you’ve already enjoyed and couples deviating from the series’ norms.
“USOTSUKI.”
Approximately 76,000 words
Fate struck Haruka and Kaori one warm spring day not so many years ago. Without question they accepted their destiny, swearing to love each other and to forge a new life built on their unwavering devotion for what they had.

Kaori, the dutiful career woman who always has her eyes on the next stage of her life; Haruka, the easy-going musician who will do anything to support her girlfriend’s ambitions. One of them is lying. Maybe they both are. It’s these amassing lies about their families, their friends, and their jobs that will lead them to discovering who is the biggest “usotsuki,” or liar, between them.

The woman picked up the cup with both hands and blew the steam off the top. The way her lips made a delicate O shape, pushing that pink gloss outward, was too enticing for Haruka to stare at directly. She kept her eyes on the white saucer on the counter as the customer sipped the tea… but Haruka made the grievous mistake of looking up as the woman swallowed.
“Oh, that is lovely,” came a satisfied voice. “How much is it?”
Haruka told her the price, and the woman quickly made the decision to purchase a small package. She rang her up on the register, taking the woman’s money while trying to keep her hand from passing over those manicured fingers.
“By the way,” the woman began again, taking her receipt and her bag by the handles, “is that Ephemeral’s latest CD?”
Haruka’s jaw nearly fell off her face. “You know Ephemeral?” The rock tunes held a steady undercurrent to their conversation, the lead singer’s scratchy vocals belting out a chorus about a crimson-colored love affair.
The woman nodded. “They’re one of my favorite bands.”
No way. This dainty looking woman, with the pressed outfit and perfect hair and make-up? She was into rock music like Ephemeral’s? “They are my favorite band right now,” was all Haruka could say.
“Are they?” The woman clutched her bag to her chest. Her curving chest, as Haruka couldn’t help but notice. This was the kind of day that could only get better or worse, depending on if she lived in a comedy or a tragedy.
“Yeah… did you hear that they just transferred to a major label?”
“Absolutely. Everyone in their fan club heard about it.”
“You’re in their fanclub?” Not even Haruka bothered with that. Sometimes her favorite bands came and went so quickly that she learned to not join fanclubs until she was sure they would be around for a while – or that she would be interested in them. “I only heard about it online, on their website.”
“Uh huh…” The plastic handles of the bag tumbled in the woman’s hands, stretching as her skin turned red. Is she nervous? Haruka hid her hands behind her back, so the customer couldn’t see her nervous habits, like flicking her fingernails. “Actually,” the woman then continued, with a meek voice, “I have tickets to their show this Saturday. The fanclub only live celebrating their anniversary and getting onto a major label… I have an extra ticket… but nobody to go with…”
Haruka nodded. Then the words sank in.
The entirety of her thoughts, feelings, and words were lodged in her throat, blocking her ability to swallow or speak. Is she asking me out? That pretty side-glance, that charismatic smile, those fluttering lashes… this felt like something straight out of a teen drama, where the (bluntly heterosexual) female lead waited for the good-looking hero to ask her out. Does that make me the good-looking hero?
Behind her, the lyrics from Ephemeral’s song about knee-shaking love played out. “Take the one you love by the shoulders and tell them that you love them.” That was the lead singer’s way of expressing that sort of desire. Haruka, however, would not take this young woman by the shoulders and scream, “Yes!” even though she wanted to. Instead she said, “I hope you can find someone to go with.”
A flash of disappointment covered the woman’s complexion. “Maybe…” It was replaced with deep, churning red. “Are you available Saturday night?”
She’s asking me out! Heart pounding so hard that it almost bruised her ribs, Haruka’s mouth went dry. Say yes, idiot!
“I’m, uh… Douyoubi kana…” Haruka scrambled to remember what she was possibly doing that Saturday. She had to work during the day, and at night her father was hosting a small party with his friends, but… Nothing important. Still, how could she blurt out yes to a complete stranger? She didn’t know this woman from the Empress. There were friends of Haruka’s who would have no problem saying yes – many of them foreign and from countries where being forward like that was permissible. But Haruka still had it pounded into her head that she should be demure, in a fashion. Like this woman before her, who managed to ask her out while looking like a sweet thing who knew not what she did. I am pretty sure she knows.
“Oh, you must be busy. Please forget I asked.” The woman turned and took a step.
“No, wait!” Haruka lunged across the counter, one hand extended toward the woman. “I mean… I’m not busy. If you really can’t think of anyone else to go with…”
The woman glanced over her shoulder, relieved. I almost ruined her day. And almost ruined her own.
A cell phone came out of the woman’s purse. “Let me get your number… Miss…”
“Huh? Oh!” Haruka pulled out her phone. “My name is Haruka. Haruka Kitamoto.”
The woman typed into her phone. “Nice to meet you, Haruka-san. My name is Kaori.”
Kaori. Haruka remained in a daze as she inputted the woman’s name and number into her phone. That’s a pretty name. It evoked the word for “scent,” perfumed, laced in lavender, like the tranquil moments after a bath when everything was clean. But the wink Kaori gave her as she waved goodbye and left was anything but clean.
“See you Saturday, Haruka-san,” she said, hand over the doorknob. The bells jingled as the door opened. “I look forward to it.”
Haruka stood as if living in a dream. When her father returned minutes later, he asked her what was wrong, and all she could say was, “I hope you don’t need me Saturday night.”